One critical skill students often ask to learn is the ability to accurately touch type. In this article we will discuss if learning to touch type is worth it (spoiler alert: it is) and what you can do to improve your typing and keyboarding skills. 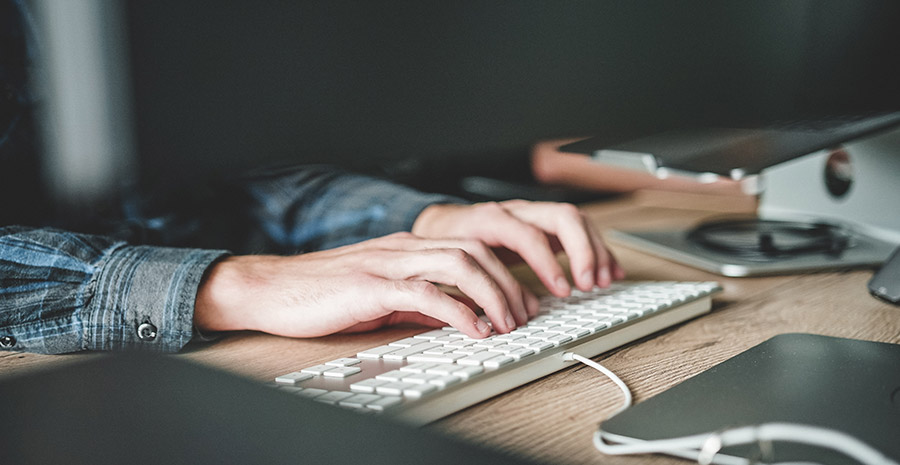 So which is it? Well, we’re gonna show you how to improve both the ability to type letters and punctuation AND how to use the keyboard to activate hot keys and other functions. So sit back, get some coffee, and let’s learn to touch type.

What even is Touch Typing?

Now, if you are a two-finger typer that doesn’t mean you can’t type fast! Lots of people can type perfectly fine by using this method. Just like any other skill, you can certainly train this method to work for you. According to Wikipedia two finger typists “commonly reach sustained speeds of about 37 wpm for memorized text and 27 wpm when copying text, but in bursts may be able to reach speeds of 60 to 70 wpm.”

Wait, what is this WPM stuff?

WPM stands for Words Per Minute and is the accepted way to measure typing speed. Speed is calculated with one word being five characters long, so you can think of it as how many five character words can someone type in a minute.

The fastest English language typist was Stella Pajunas-Garnand in 1946 who had a peak speed of 216 words per minute. In August 2020, Anthony Ermolin won the Ultimate Typing Championship with a wpm of 210. The average typing speed is around 40wpm. If you’re already there, keep reading for some tips to improve your speed and If you’re a little below that, well we’ve got tips for you too! 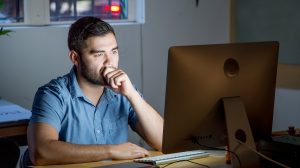 If you’re wondering how fast you can type, try taking the test at https://humanbenchmark.com/tests/typing.

Should I Learn to Touch Type?

Speed and accuracy will improve your career in almost any field. The majority of entry level office positions, including those for Medical Billing and Coding, require a variety of administrative duties. These include filing records, purchasing supplies and equipment, admitting patients, scheduling appointments and assisting with examinations. Almost all of these positions require the candidate to be reasonably fast and accurate on the keyboard.

Regardless of the office environment you get a job in (doctor’s office, hospital, medical clinic, pharmaceutical company or government health agency), having strong keyboard skills will be crucial to your success. Many offices and medical offices in particular can be fast-paced. Slow or inaccurate keyboarding can hurt office efficiency, potentially impacting the flow of services that clients or patients expect. 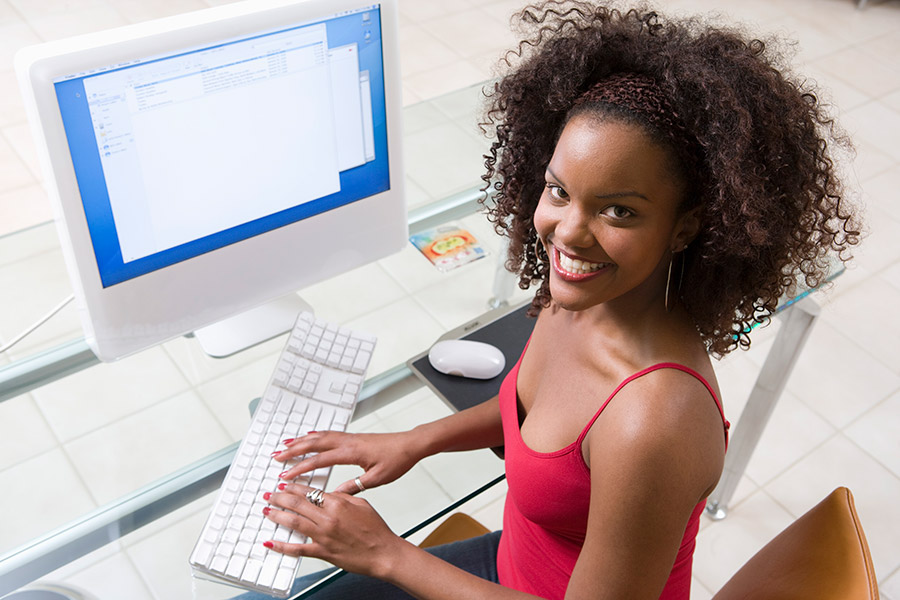 If you work with computers either as an online student or in a professional setting, learning to type can make a big difference. LinkedIn reports that learning to type will save you time, give you better focus at work related tasks, and will create fewer errors.

Save you time – According to Ratatype.com increasing your typing speed by 20% can save up to 35 minutes a day. Nearly 213 hours per year.

Improve your posture – If you learn to touch type then you can improve your health. Typing without looking at the keyboard will reduce neck strain as you can focus on screen or the dictation instead of moving your head up and down.

Improve focus – Humans do not have the ability to focus on two things at once but instead must “micro split” their attention to complete two tasks. This can be very draining. Learning to touch type will improve your focus by allowing you to focus only on your document.

Improve output – As you improve accuracy you will spend less time checking your typing and more time focusing on the message of your work.

Reduce editing – Touch typing allows you to find errors as you type instead of requiring tedious proofreading.

The QWERTY method is by far the most popular touch typing method. In fact, it’s so popular there are not even statistics to show how many people use an alternate method. If you choose to learn the QWERTY method you will be able to use any English language keyboard without any kind of adjustment. It works on PC, Macintosh, mobile devices, and every other environment.

The first commercially successful typewriter was invented in 1867. Because of the way the machine was constructed it would jam when two keys next to each other were pressed. The solution was to separate common letter pairings such as ST. The inventors tried many different layouts before selling the invention to Remington in 1873. Mechanics at Remington settled on what was essentially the modern QWERTY layout. Later on more keys were added for additional punctuation or functionality.

The Dvorak keyboard was developed by a statistics at the University of Washington in Seattle in the 1930s. August Dvorak organized the keys so that the letters of the most common words are on opposite sides. The theory is that by alternating hands in every stroke, words could be typed faster and easier. With the QWERTY method, many words are typed using only one hand. In addition, 70% of of Dvorak keystrokes are made on the home row versus 32% with QWERTY.

The Colemak method was released in 2006 and proposes to retain the benefits of Dvorak while making it easier for those who know QWERTY to switch. It also places the most used keys so they are pressed by the strongest fingers. Colemak is designed to place the least amount of stress on wrists and pinky fingers. Colemak is also easier to use for those who need to type in multiple languages.

Why You Should Learn to Touch Type QWERTY

Although there are benefits to learning an alternate method, we suggest you focus your efforts on learning QWERTY. Using an alternate method will require you to constantly have to modify your keyboard or computer from the standard layout. While this can be done fairly easily it can get very complicated if you often share a computer with QWERTY users.

This is especially true for those in the field of IT or Medical Billing where you will often be using multiple computers and you will be unable to modify the settings. Dvorak makes it more difficult to access hot keys which is detrimental to 3D and Web Design students.

How Do I Learn to Touch Type?

The best way to learn to touch type is by building up your muscle memory. This will allow you to type without looking at the keyboard.

First, let’s test your current speed. It’s a good idea to get a base number to compare yourself against. This way you can tell how much you’ve improved after a few days of practice. Take your time during the test. Remember that accuracy is always more important than speed in the real world.

Visit https://speedtypingonline.com for a quick typing test. When you have finished, it will display several test results. Save the link to your results so you can compare it to your progress.

This site also allows you to configure several options. For example, this test allows you to switch the keyboard layout to Dvorak, Colemak, or other methods and languages. This test is also unique in it allows you to test for the 10-key number pad which can be a huge time saver for medical billing and coding.

Start to learn to touch type by visiting this article on the home row. The home row is the middle row of keys and is where your fingers rest when touch typing. It allows you to practice keys without any kind of timer or test. This is a great place to start if you have never tried touch typing before. It will also help you brush up on your skills if you haven’t tried in a while.

There are two sites to choose from when starting to practice typing. Both offer free profiles that will save your progress as you move through the program. You may want to try both of them before deciding which you like better.

https://www.typing.com/ – This site allows you to create a free profile and take several small lessons. Typing.com includes several videos that discuss why learning to type is important and how to get started. It also includes several tests and games to help you stay motivated.

https://www.typingclub.com/ – This site allows you to create a free profile and take several small lessons. It will save your progress and give you a running total of your speed and accuracy. Typing club also allows you to take a test to “skip” lessons so it is also good for those with some typing experience. In later lessons, it will also allow you to learn to touch type equations and other special symbols. This can help to make you a faster programmer if you are in the Web Design program.

Typeracer is a good way to test your skills against others. It can be stressful to compare yourself however, so wait until you have some practice under your belt.

10fastfingers.com is a site with several tests and games. One allows you to practice with your own text which can be useful for practicing tricky letter combinations or words you commonly misspell.

ZTy.pe is a game where you have to type to shoot missiles at spaceships. It gets much more difficult as you raise in levels.

If you’re a gamer, you might want to check out Typing of the Dead. Based on the SEGA arcade game, you’ll have to type letters to take out zombie hordes.

Make an appointment with your local Career One-Stop / America’s Job Center or a staffing agency to have your typing skills formally tested. Most of these organizations will issue you a free test and certificate which you can show on your resume, and include in a portfolio. Having the certificate may allow you to avoid taking the test at an already stressful interview.

If you want a less formal certification, you can find a test at https://www.ratatype.com.

If you want to learn an alternate layout such as Dvorak or Colemak consider the following sites and software.

Typingclub.com also offers lessons in Dvorak. You can make an account with typing club just like for QWERTY If you are interested in learning this alternate format .

Ratatype is a site that offers many different courses. They offer courses in QWERTY, Dvorak, French, Spanish and others. Ratatype will also allow you to take a test that results in a certificate. They will save your progress with a free profile but do not offer a way to skip courses if you already have some typing experience.

AmpheType is a downloadble software for practicing typing. It is “layout agnostic” meaning it would be just as useful for those learning Dvorak or Colemak methods.

Learning to touch type can be a long process. Commit to spending fifteen to thirty minutes practicing every day. Be sure to re-test yourself at https://speedtypingonline.com often to compare your progress, but don’t feel discouraged if it takes extra time. Everyone learns at their own pace!